How To Use NPrinting APIs In A Qlik Load Script

Task chaining is here! We are delighted to announce that one of the most requested features for Qlik NPrinting is now available with our February 2018 release.

If you thought that Qlik NPrinting 17 triggers were only time-based and prevented you from creating event-based dependencies on other Qlik tasks, (such as app and data reloads) then think again. This functionality is now available out-of-the-box using the Qlik NPrinting APIs and a Qlik load script!

You can now seamlessly run tasks that represent the typical workflow for a Qlik NPrinting report. Using the publicly available APIs, you can reload Qlik NPrinting connection metadata, update user information and run a publish task, all following a Qlik data and/or app reload.

You can also institute a poling mechanism to ensure that one task is complete before starting a subsequent one.

The technical details and examples can be found here: https://community.qlik.com/thread/292037 (even though the example uses Qlik Sense, this can be done just the same in a QlikView load script).

Please note that this functionality was made possible by the resolution of a bug related to the Qlik REST connector. You will need the REST connector v1.3 which is part of the February 2018 release of Qlik Sense, or it can be downloaded separately and copied over the old REST connector.

Our long-term vision for reporting involves exposing the Qlik NPrinting tasks in the QMC, however this is a first major step toward integrated scheduling

This is a fantastic news....

This will change the way nPrinting reports are schedule this days..

This is a great step forward for Qlik Nprinting 17.

However we as customers will wait on using Qlik Nprinting 17(we use SSRS) until 2 features are available.

1. Our long-term vision for reporting involves exposing the Qlik NPrinting tasks in the QMC, however this is a first major step toward integrated scheduling

I would guess that you guys are mening (in QMC): 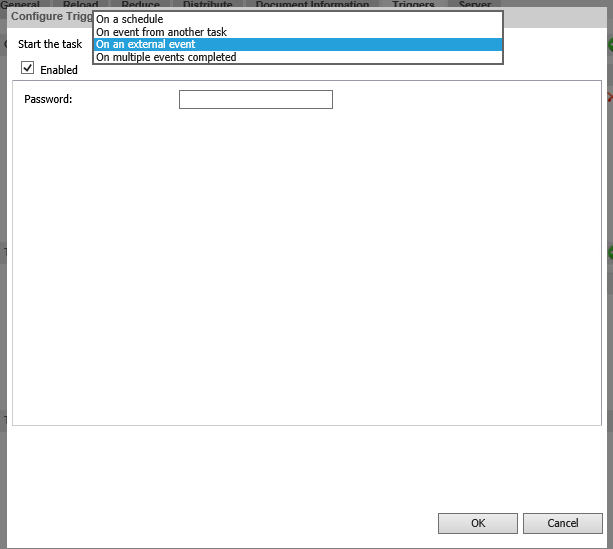 To have a trigger e.g. "Trigger Report on Nprinting 17"

The same integration to LDAP (as in QMC) so that reports in Nprinting 17 can use AD groups and users directly.

Thank you for this feedback.

The long-term vision for NPrinting is for it to be much more integrated in the product. That would mean NPrinting tasks in the QMC, as you described. Also having a single set of users to mange instead of a set for each product.

Until we get there, we will continue to deliver incremental value to the existing functionality of the product. We have set as one of our top priorities to have AD integration in the NPrinting web console. It will be part of our roadmap for this year, exact date TBD.

Another request is to import recipients from text files or maybe an app conection. Using Excel files as unique datasource is awkward.

Pablo - we are addressing user management in our upcoming releases. Our top priority right now is for active directory integration in the NPrinting web console. We may consider additional data sources (like text files) in the future.

I agree, Excel is not a proper solution to this.

Is there a time-frame on having Nprinting triggers in QV QMC?  I'd like to know how far out this is before committing to the REST connector route.

So, it's now been over 2 years and we all are waiting for an update on trigger nprinting from within QlikView QMC. Any news?

@Stephen_Jasionowski might as well comment on this, "The long-term vision for NPrinting is for it to be much more integrated in the product." any news here?

Hi Sahal,
I work for Qlik in our Customer Success team.

We are building printing / reporting capabilities into our Qlik Sense SaaS edition.
We have recently released functionality into the product that allows users to create "Self-Service reports with subscriptions"...
https://help.qlik.com/en-US/cloud-services/Subsystems/Hub/Content/Sense_Hub/Reporting/Subscription-r...
Video...
https://www.youtube.com/watch?v=GydNMmIK4cs

NPrinting itself is not actually being integrated into Qlik Sense or QlikView.

If you would like to know more about our Roadmap, please see our Product Innovation and Direction page...
https://www.qlik.com/us/products/innovation-and-direction

@SimonK , That is great that you guys are focusing and future development your SaaS platform however, do you guys take in any ideas from us customers that are still working in QlikView and/or Qlik Nprinting products?

If we take Nprinting for an example there are still a lot of features that are missing and that we (customers) have pointed out in the "Idea" section of the community but still no response, or rather "Look in the API" is the simplest answer we get..... very frustrating.

* Built-in dependency's in Nprinting when triggering tasks within Qlik Nprinting. E.g when a meta data connection is finished -> trigger a publish task

"Simple" Ideas like this is still not implemented 2 years after we asked for them... This should be out of the box, but is not.