EDIT: (added example of sample data , I want most recent record of each Acct #, also need to load the other fields) 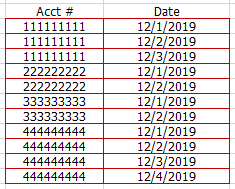 Your requirement could be intrpreted in more than one way, but I give it a try. You could try this.

added example of data, minus the other fields that I also need to bring in.

Neither of these are working... I am still getting multiple accounts back... Not sure what is going on here guys, been stuck trying to get this seemingly simple section to work.

Per Acct_num I only want to keep one and I want it to be the most recent Date for each.

Not sure what was going on, I think it's working right now, I'll check back if it isnt. Thanks