Announcements
On Demand Webinar: See Why Thousands of QlikView Users Have Switched to Qlik Sense. REGISTER
Options
Turn on suggestions
Auto-suggest helps you quickly narrow down your search results by suggesting possible matches as you type.
Showing results for
Search instead for
Did you mean:

Group by a dimension.

I was trying to group the data w.r.t the dimension Warehouse.

When a warehouse is selected , intstead of seeing all the records with a total in a table.

I wanna see only the total of the data in the columns.

Your expression labelled SKUs is :

Within it you have field [360-day Velocity] with no aggregation function so it will default to using the Only() function and unless all the values are the same for every row in each discrete warehouse it will return null() and you will get the results you are experiencing.

This flag can then be used in Set analysis in your Chart object.

Backing off such calculations into the load script is always good for efficiency, as they are just calculated  once during the load as opposed to dynamically in the GUI whilst the End Users are twiddling there thumbs and getting frustrated.

When you get the first Chart Expression working then do the other expressions similarly.

You are trying to get this?

I cannot include it in the script part,

Any solution to do it in Front end??

That was a question, I have not done anything yet

How do you determine which warehouse name will show up there? Is it always going to be OB2?

If yes than you can do this: 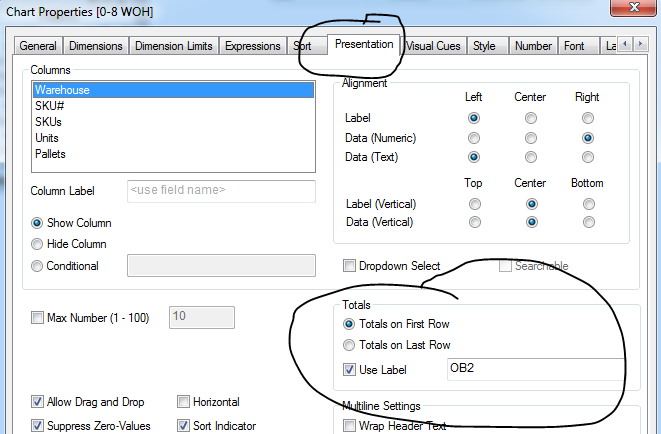 But can i please knw how to enable all warehouse statistics at a time .

Since it is showing only OB2 / one warehouse at a time.