Announcements
Join us for a live Q&A! September 21, 10 AM ET - Onboarding Fast in Qlik Sense SaaS! REGISTER
Options
Turn on suggestions
Auto-suggest helps you quickly narrow down your search results by suggesting possible matches as you type.
Showing results for
Search instead for
Did you mean:

i want to schedule a Job daily basis in Qlikview Server which suppose to run on specific time like 6:00 PM and if it not successful executed try around 10-15 times on 2-3 min interval and after that it stopped.

i know to how to trigger a Job but only basic like trigger by time etc.

Hi, did anyone have any idea how to do this

what is the cause of unsucessful execution?

Does reading a qvd or excel file cause the problem?!?

My Job which is written in vb script is fine, i am able to handle successful and failure both cases. and failure cause did not matter. my concern is just that i want to run a particular job for for multiple times ( 4-5 times) after 2-3 minutes of interval, how schedule that

You have an option to pass parameters for 'Number of times' & 'Timeout'. 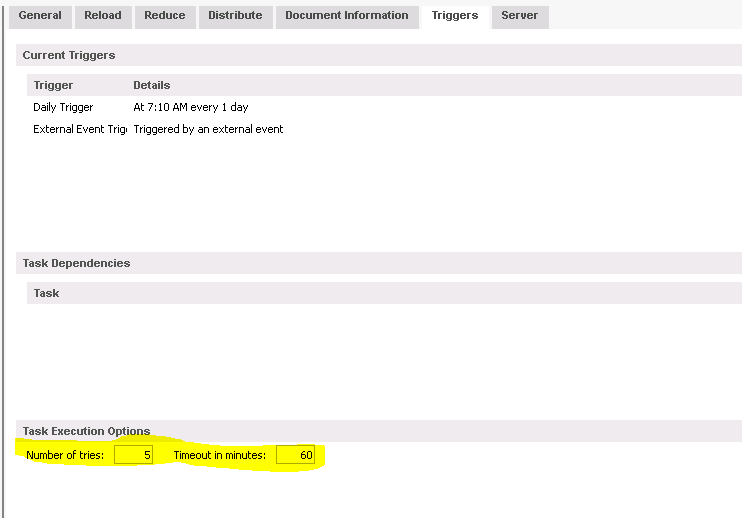 That Option is available in QVW Trigger Option, i want this in Supporting Task -> External Program. in that there is not such option.

I don't know the details, but you could do the following:

- the second qvw uses a counter saved in a separate qvd,  you could also work with sleep command for delaying

- on sucessful reload of "second qvw" , main.qvw will be triggered ...

If the limit is reached , for example 15 times, then force the "second qvw" to end in an error

don't forget to reset the counter once a day...