It depends on your business requirement and table structures. And the key fields that you have in the model and the keys that you defines. Mainly we try Start schema to design.

OK . But i would like to know on which circumstances we wil go for snowflake and star schema

for better performance star Than Snowflake

when you have Big fact tables you could use snow flake to break dimension hierarchies-> country,state,city

data retrieval will fast on selection in star schema as dimenion are closely connected to fact.

Kindly check the attached image for Star Schema vs Snowflake Schema. I hope this will help you to understand in better way. 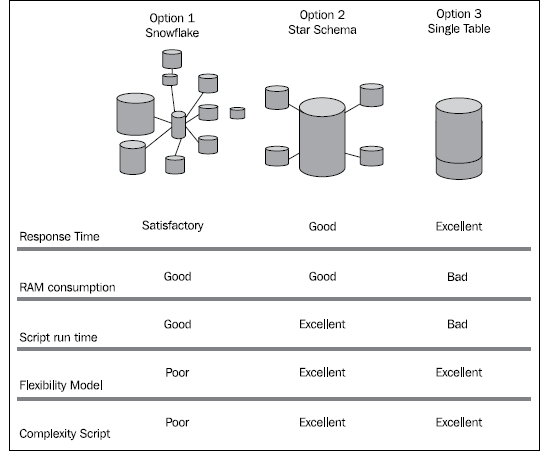 it depends on your data model however most of the times it is preferred to use star schema having a single transaction table (fact table) with surrounding dimension/attributes table.

in general for qlikview it is better when you are writing an expression having a sum of two different columns of your data model that those two fields be in the same table, going from one table to another in qlikview consume more resources, however you do not want to end up with one single table in your data model as it will consume a lot of resources (RAM), therefore a star schema is the most appropriate one having only one link between the attribute tables and fact table.

Yes, there is no hard and fast rule where we should use star or snow flake schema.

As anand told it depends on your business requirement and table structures.

These data warehouse concepts are used to build data models in qlikview.

Merits of these concepts is to remove synthetic keys, circular loops, so performance is good

And minimum memory utilization is achieved.

Below are some differences for star and snow flake schema:

A star schema has one fact table and is associated with numerous dimensions table and reflects a star.

The Star Schema is highly denormalized.

A dimension table will not have parent table in star schema.

The dimensional table itself consists of hierarchies of dimensions.

As the star schema is denormalized, the size of the data warehouse will be larger than that of snowflake schema.

We generally encourage you to handle many-to-one hierarchical relationships in a single dimension table rather than snowflaking. Snowflakes may appear optimal to an experienced OLTP data modeler, but they’re suboptimal for DW/BI query performance. The linked snowflaked tables create complexity and confusion for users directly exposed to the table structures; even if users are buffered from the tables, snowflaking increases complexity for the optimizer which must link hundreds of tables together to resolve queries. Snowflakes also put burden on the ETL system to manage the keys linking the normalized tables which can become grossly complex when the linked hierarchical relationships are subject to change. While snowflaking may save some space by replacing repeated text strings with codes, the savings are negligible, especially in light of the price paid for the extra ETL burden and query complexity.

You can check Kimball data modeling

Thank you all for ur time

It all depends on your Requirement and Data size ,  STAR will have better performance but in certain case it might add more data to the qvw ....