We are in the process of upgrading from 12.10 SR4 to 12.40 flat and running number format differences (among others).

background: these fields are in Dimensions (not expressions)

I've tried added a "Num() around the dimension but that creates a static format, not the dynamic formatting that we had in v12.10.  =Num(MReceivedQty, '#,###.#') - this forces every entry to have a single decimal point, which is incorrect.

Has anyone else see this and have a fix?

As a debugging exercise, please look up this field in the Document Properties, Number pane and tell us what radio button value is selected, in both the 12.10 and the 12.4 apps.

Survive Reload is selected on both versions as well. 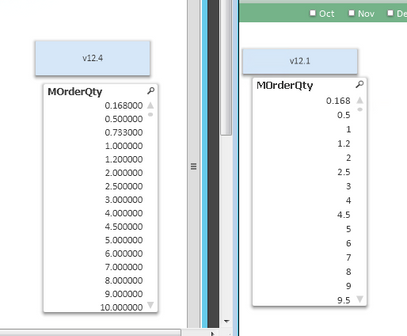 Interesting. No ideas, perhaps it's worth checking in with QT Support.

I ran into another oddity related to this.

In a transform, I saved a table as a qvd, deleted the table, then loaded that qvd.

Prior to the save, the numbers were formatted correctly, but after I loaded the qvd the numbers had the trailing 0's.

My workaround for that was to do the save (for debug / testing purposes only) but no longer delete the table.  That kept the number formats correct.

Rob - I will be working with my support partner to open a case on this.

You can use the "Touchless" technique to control the formats from QVD as well.