This forum is for user/member-created articles across the entire Qlik portfolio. Any member that is logged in can create and publish an article here. You must choose the appropriate label in order for the articles to be properly categorized.

A question that gets asked regularly is how to calculate a rolling measure over a period of N-months (or weeks or days). For example a 12-month rolling total or a 4-week rolling average. There are several ways to do this. But these approaches have some limitations that need to be kept in mind. I'll try to explain these approaches and some of their limitations.

This is a very simple table with little data, but this enough for demonstration purposes. 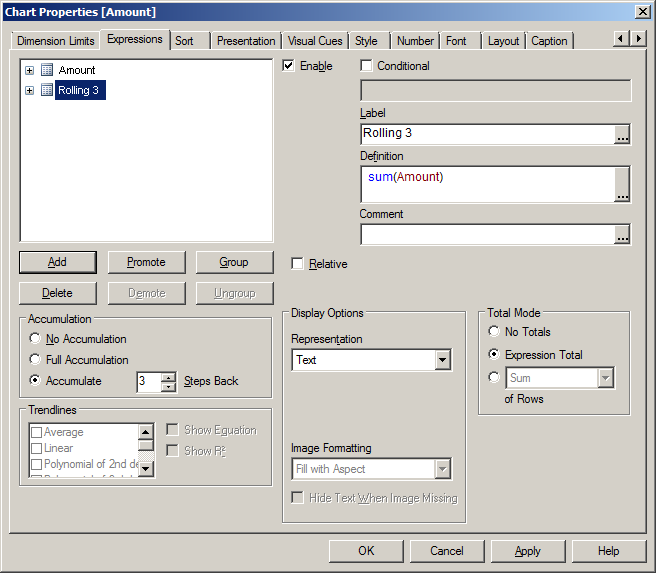 The second option uses the rangesum function. That expression looks like this:

This sums the Amount value on current row and on the previous two rows. The resulting straight table looks like this: 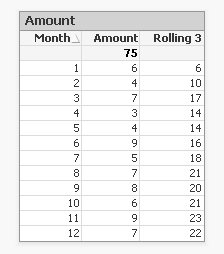 This looks good. The rolling 3 months amount is calculated correctly. But what happens if a selection of months is made? 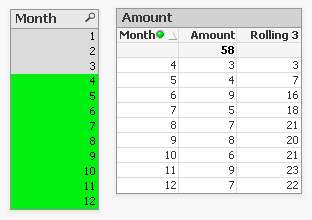 This goes some way to doing what we want, but the issue of displaying the wrong rolling 3 month amount for month 4 isn't solved yet. Contrary to what I first thought there is a solution for this, as Henric pointed out to me in the comments below. By combining the rangesum with the aggr function it's possible to calculate the correct rolling 3 month amounts for each month. The expression needed for that looks like this:

How about set analysis expressions?

This expression should calculate the sum of amount for the three month period:

But notice the only() function. This requires that only one month value is selected. After selecting month 4 the result looks like this: 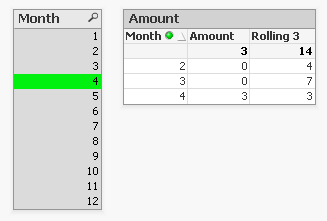 This shows the selected month, but also the two previous months. And the values are not accumulated.

Ok, but what about the max function instead of only?

That gives a different result, but still not what we're looking for: 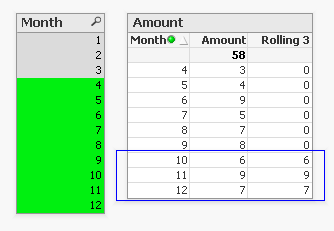 Now only the last three months are shown and again the values are not accumulated.

The 'problem' is that the set is calculated once for the entire chart, not per row. This means that it's not possible here to use Month both as a dimension and in the set modifier in the expression.

The AsOf table links a period with all the periods in the rolling period. In this example months are used, but it can be applied to any type of period like hours, days or weeks.

The AsOf table needed for the rolling 3 month calculations looks like this: 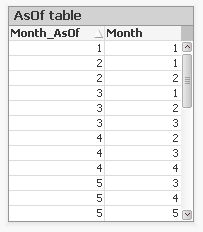 What this does is create three records for every month using the while statement. But that also creates three records for month 1 and 2. This would create a month 0 and a month -1. The right join is used to remove those incorrect month values.

Now that the AsOfMonth table is created the Month_AsOf field can be used instead of the Month field in the straight table. The expression for the straigh table is simply sum(Amount). 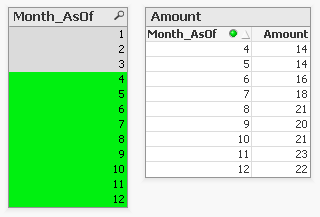 This can be expanded a little so not only the rolling 3 month can be shown, but also the amount for the month itself. To achieve this the AsOf table is modified by adding a field to label the type of period. And records are added to the table so each Month_AsOf value is linked to the matching Month value:

There are now two types of periods available: Current and Rolling 3. Additional period types can be added for example for Rolling 6, Rolling 12 month and Year-to-Date periods. You can find examples of these types in the attached AsOf Table Examples.qvw document.

The period type can be used in the chart expressions to calculate the amount for the wanted period:

Concluding, there are two solutions that do what we want:

The first has the advantage that no changes to the data model are needed. It's also possible to dynamically change the period to aggregate over by using a variable instead of a hardcoded number of periods. A disadvantage is that that it's a somewhat complicated expression that also comes with a performance cost.

The AsOf needs changes in the data model to create the AsOf table and fill it with the necessary records. The advantage is that it likely performs better on large data sets. It's also quite versatile since you can add several sets of records to meet different scenario's. The expressions you end up with in the charts are also less complicated. That said, it will likely take you some time to fully understand the AsOf table concept and realize all the places where you can put it to good use.

In the end you'll have to decide for yourself which solution is appropriate in your situation. With regards to the performance of one or the other solution, you will simply have to test to discover if the performance is acceptable. But of course such testing is already part of your development process, right?

I'd like to thank John Witherspoon for introducing me to the AsOf tables concept and Henric for pointing out the solution using the rangesum function in combination with the aggr function.

Good post! It covers a number of different methods well.

But there is an additional way to solve this problem - and that is to combine the RangeSum(Above()) with the Aggr() function, e.g.

Then each row (or bar or slice) will be a sum over different "rows" defined in the Aggr() function. See more on Accumulative Sums

And whoa, I totally missed that one. A belated aha-erlebnis.

Thanks for mentioning that solution. I remember seeing Elif's post but it probably went right over my head back in October.

This is very helpful.

One question on the AsOf table - if you were do calculations that did not involve rolling amounts, would you have problems with data being duplicated to create the additional rows?

The typical usage would be that you have a field from the AsOf table as dimension and Sum(Amount) as expression. Then the Amount will be summed in the transaction table - where this field resides.

Which means that the same dollar will be counted in several different months, but the totals will still be correct.

Many Thanks..This QVW and this post helped a lot in achieving my targets. Learnt a new logic as well.

Looking forward for more concepts and supports. Thanks again.

Excellent post. I finally found, thanks to this post, what I was looking for : how to get a simple moving total, year to date or a comparison versus previous year.

Very Useful post with step by step move on application...