When building business intelligence solutions one problem is that data usually contains errors, e.g. attributes are written in different ways so that data cannot be grouped correctly. The attribute could be written in upper case or not; it could be abbreviated or not; and sometimes several synonyms exist for the same thing.

As a consequence, what the users really think of as the same instance will appear on several rows in a list box, or be displayed in several bars in a bar chart. This will cause problems in the data analysis, since selections and numbers displaying totals often will be incomplete.

But there are ways to solve this. The best way, is of course to correct it in the source data. But this is not always possible, so it may be that the correction must be made elsewhere.

In QlikView and Qlik Sense there are several ways to do this. The most obvious (but not the best), is to use a hard-coded, conditional expression in the script:

Similar constructions can be made using Replace() or Pick(). These all work and will do the job.

But they are not manageable.

Should you want to add more cases or change some previous ones, you will soon realize that this isn’t a good method. The expressions will become too long and they will be error-prone. So I strongly recommend not doing this.

There is however a solution which is both manageable and simple: Mapping Load. The first step is to create a mapping table with all changes you want to make: 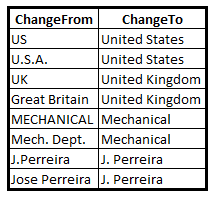 Then you load this table using the Mapping prefix:

Now you can use this table in the script to correct all field values. The simplest way to use the Map statement: Declare the mapping early in the script before any of the relevant fields are loaded, and the corrections will be made automatically:

Alternatively, you can use either ApplyMap() or MapSubstring() when you load the field, which both will make a lookup in the mapping table and if necessary make the appropriate replacement, e.g.:

The mapping table will be discarded at the end of the script run and not use any memory in the final application.

Using a mapping table is by far the best way to manage this type of data cleansing in QlikView and Qlik Sense:

Don't join - use Applymap instead

Mapping as an Alternative to Joining

I also like to add a default value to the ApplyMap function therefore reducing the risk of null values.

This is then easier to drill down into the records which don't have a Country, the client will then hopefully be able to cleanse to the data.

It looks ugly but it works

I also have a dedicated Data Quality qvw that shows data that does meet agreed data quality rules, e.g Employees that are not assigned to a Business Unit.  This qvw has standard QlikView drill downs, sums, counts etc for slice 'n dice analysis to give visibility of data quality, identify Business Units in need attention then go down to row level to give people the information they need to be able to locate the dodgy data in the source operational system.

Be careful with the third parameter of Applymap()...

You are right that there are many cases where you should use '#not known#' or something similar as third parameter. But I would not use it for data cleansing.

Is this possible to use a fuzzy search (as Levensthein algorithm) to measure the risk of a hidden duplicate for each record where there is no match in the map table ?

Not easily, no. But I am fairly sure it would be possible to create an extension object that would do exactly this.

Good post HIC. Especially the reminder about only needing to include changes in the mapping table.

One more reminder; MAP USING will not modify values in an optimized QVD load.

I frequently find I want to map using wildcards in the "from" values. It's not part of the native MAPPING, but can be simulated with a pick(wildmatch()) as shown in this example.

Or if you use QlikView Components:

@Xavier Retaillaud: there is a Data Quality group where I have posted an Levenshtein example: Levenshtein Distance VBScript

One benefit of using Mapping table as well is if the source file is excel or text file users can manage the FieldFrom and FieldTo update.

Yes, that is definitely a benefit - I like to keep as much key-information as possible out of my apps and in some publicly accessible space (or at least accessible to whoever must have that info). That makes everything more robust.

It works with Rob's approach, too since you can load that Wildmap-table from an Excel file that is maintained by whoever is in charge of those associations.