Pitfalls of the Aggr function

The Aggr() functions is one of the most advanced functions in the Qlik engine, and it is not always easy to use. This blog post is about its most common pitfalls.

This is a function that enables the app developer to create nested aggregations, i.e. aggregations in two steps. Essentially the Aggr() is a For-Next loop where each loop contains a measure calculation. When all loops have been performed, a final aggregation based on the array of calculated measures can be made.

If we, for instance, want to calculate the monthly product sales, we could do it by using

This will produce a virtual table that looks like 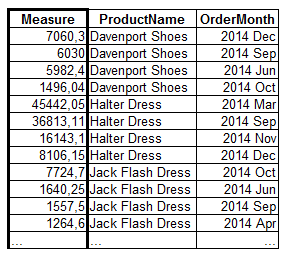 Note that there is exactly one row per distinct combination of the two dimensions.

So, the Aggr() function creates a virtual table; an array of values that need to be aggregated in a second step. Hence you should wrap the Aggr() in an outer aggregation function. For instance, if you want to use the above table to calculate the average monthly sales, you should use

With this mental picture of how the function works, we can start looking at the pitfalls.

The first parameter of the Aggr() is a measure, and as such it is always an aggregation. Hence, you should use an aggregation function. If you don’t, the calculation will use Only() and the virtual table may inadvertently get NULLs in the Measure column. See more on Use Aggregation Functions!

Note the totals line in the chart above: It shows the average over both products and months. Generally, totals will always be NULL if the outer aggregation is omitted.

So, there are both inner and outer aggregation functions. Where do I put my Set Analysis expression?

The answer is often “In both”. It may not be enough to have it in only one of the levels.

The grain of the Aggr() dimensions must be identical or finer than that of the chart dimensions.

For example, an Aggr() with Month as dimension can be put in a chart that has Year as dimension. In the following table, the average monthly sales numbers are correctly calculated, and displayed as an average per year and product.

But the opposite isn’t necessarily possible. If you put an Aggr() with Year as dimension in a chart with Month as dimension, you will get problems. You may get a table that looks like this:

Here, the Aggr() function has produced one number per product and year, and this number has been assigned to one single month while the other months contain NULL. This is a result of the grain mismatch and most likely not what you want.

With this, I hope that you have a better understanding of Aggr().

When should the Aggr() function NOT be used?

What about the NODISTINCT modifier?

In most cases you should not use the NoDistinct qualifier.

It would be useful to see the equivalent set analysis syntax, perhaps ogether with a couple of more complex set analysis examples.

The Aggr() function and Set Analysis are fundamentally different. You cannot substitute one with the other, so there is no "equivalent" Set Analysis syntax.

But a blog post with more advanced Set Analysis could still be a good idea...

A clear insight as usual.

Any chance to sort the values in an aggr-Dimension? When I do something like

I would like to sort the Field "Year" ASC (or DESC).

The third parameter of Concat() deals with sort orders, so try:

Put a “-“ before the aggr to sort descending instead of ascending.

Unfortunately not. However, we have internally recognized the need to sort the output of the Aggr(), so it is on my wishlist, as well as on yours...