Is there a standard procedure for calculating a forecast of sales by extrapolation (accrued revenues diviert by expired months, then multiplied by months left till yearend )

for example: sales till this month November is 2 millions, so every month = 200.000, Extrapolation ist then

If there is a Standard procedure, can I build it in the loadstatement of my Measure Sales????

can you post some different examples and your expected result (best as file)?

The attached example has several ways of showing a forecast. These just use chart expressions. If you really need to calculate it in script instead, I could probably figure it out. 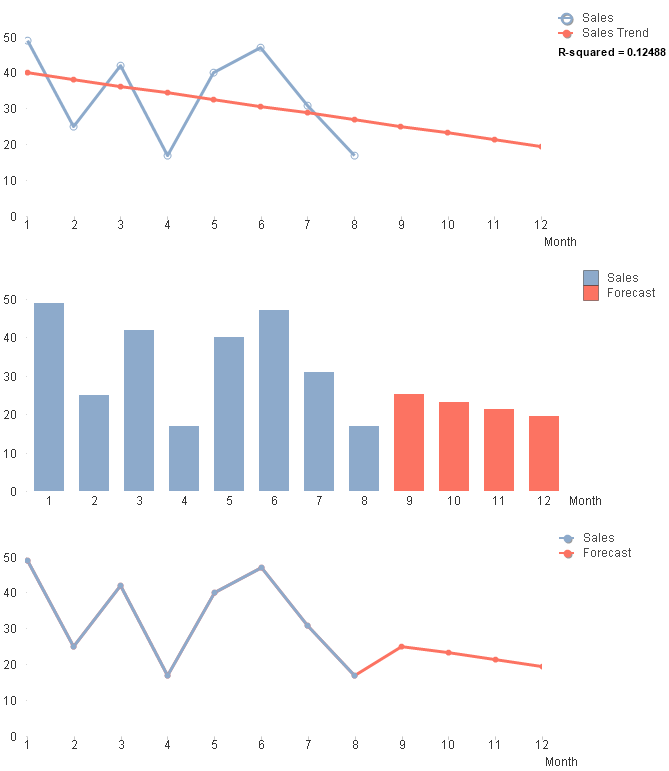 Though in your case, it might be something simple like sum(Sales)*count(distinct Month)/12 or something like that. All depends on your data and what you really want to do, I think.

Hello John, thank you for your answer and Input .

I build it in in my InvoiceSalesmodel. then I discussed it with my Manager and some Users.

As always they came with new ideas:

The Forcast should predict next 6 months in advance,

Input amouts should be the last twelve months, for instance we are now in November so the Input should be from Last year November untill now and the Forecast should go from now (November 2016 ) till May next year.

I told them that I wished they figured that out earler. I hope you have some ideas?

It's been my experience that I rarely get the real requirements until I've already put a QlikView application in front of them. Until they can start interacting with the data, they either don't know or aren't willing to take the time to figure out what they really need in terms of charts and the like. Some of this is my fault, as it was that way for so long that I now by habit just get the most basic of "we want this data" requirements, and then slam out a very basic QlikView with how I might personally want to interact with that data, then solicit feedback. I usually get at least the data model right the first time (I'm usually very familiar with the data), and it's mostly a matter of building additional charts and ways of interacting with the data from there.

Anyway, that's all an aside. See the attached for a data model solution to your problem, since it seemed that was your preference. I'm sure it could be solved in the chart too if preferred. Here's the script of interest:

We're doing a linear regression over the past 12 months of data to predict the future six months of data. We also have types of Actual vs. Forecast, and these are associated with colors loaded in the script and used in the background color expression.

Thanks for your support.

Your solution works, had to change some minor Details (like some fieldnames).

Have a nice weekend

biplabjana77
Partner
In response to johnw

your solution is perfectly working for Organisation forecasting for future months.

But i have some more specific requirement

Let i have Monthwise, Branchwise,Product wise granular data of last 24 months in the following format :

Can you please help...

Just add the dimensions you want to forecast by to the loads where you concatenate the forecast. See attached and script below. Well, this is forecasting 6 months from the past 12, but replace 6 and 12 with whatever you want in this script, and I'd think it would work like you want.

biplabjana77
Partner
In response to johnw

Thanks for your support.Linear Trend works perfectly with my data

Can you please guide to develop the seasonal trend on the basis of the above generated Linear Trend.

and this is require to generate at Branch,Product level.