How to find a number for a char: chr() and ord() functions

How to find a number for a char: chr() and ord() functions

Everyone knows that sometimes we need to use chr() function to put paragraph sign - chr(13) – or single-quote - chr(39).

But sometimes you need a special symbol, but you don’t know the number. You can find it in the Internet, but I’ve found a Qlik way how to do it. 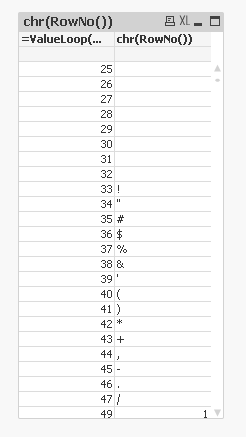 There is a faster way, If you found a symbol in the Internet and would like to know what is the number for this char.

Use the ord() function

Some interesting codes are

in the comments in different discussion jaimeaguilar mentioned that

"using chr() function you can display any ASCII / ANSI character (from chr 0 to 255) or Unicode chars (from chr 256 and up). The corresponding number in chr() function for the Unicode chars is the number referred as decimal, that can be found in plenty internet sites. Almost any Unicode char will display in ajax, but in some cases the correct displaying will depend on the page encoding."

But, I want to show like a square how to show that?

to get to know you just need to use this solution.

Try to use =ValueLoop(1,10000) as a dimension and you will find the answer soon.

Thanks, But bit difficult for me. I've posted on community, No one can resond that.

Thanks!  This is very helpful.

This is great - it helped me find a way to add a colored arrow to a text box based on a calculation.