How to disable data load editor in production Hub?

Would like to get some help on this topic.

We have a multi node site with 3 nodes, a Production node and two rim nodes for development.
What we want to achieve is to forbid developers to edit script and reload data through the Production hub.  We want users to see their apps in "My Work" section but not to edit them in prod hub.
For development purpose we want them to use the virtual proxies defined pointing to Dev nodes.

So, we are trying to only show the data load editor under Dev hubs (using prefixes/virtual proxies to Dev nodes).

We have tried with many security rules but with no luck.
This is the last security rule we tried to edit so as to achieve our goal: 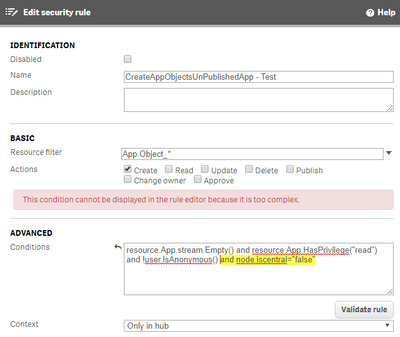 We have edited the default security rule (previously making a backup) called CreateAppObjectsUnPublishedApps adding the condition node.iscentral="false" supposing the data load editor was going to be available only in Dev hubs but as a result we got the data load editor disabled in Dev nodes also.

Has anybody out there had to deal with something like this?

Please your help to achieve this requirement.