A user opens the QlikView Desktop and attempts to lease a license from the QlikView Server. However, after successfully connecting and authenticating and even opening a QlikView document, the Desktop client remains unlicensed (Personal Edition).

The relevant log file to review on the QlikView server to verify if the user has arrived and has attempted to lease a license is the QlikView Server Event log. Note that it will only log the relevant lines when set to High logging level.

License lease has not been properly enabled in QlikView Management Console.

See How To Lease License From QlikView Server To QlikView Desktop Client for more details.

Client machines with multiple versions of QlikView desktop installed, or old installations that have not been cleaned up.

This means that if the user is opening QlikView from the correct shortcut everything is fine, but if he double clicks a .qvw a different version might open, breaking the lease. See How To Associate .QVW Extension To A Specific Version Of QlikView for detail on changing the QVW file association in Windows.

License lease only allows a borrowed CAL to be used twice in a 24 hour / 7 day period, depending on the version.

This can cause problems if the user connects to many different servers in a Citrix "Farm" during this time. A single user can lease up to two licenses to two separate workstations within a 24 hour / 7 day period. An attempt to lease the third license in a 24 hour / 7 day period will be revoked if the same User ID is used. Additionally, the existing license lease of the third machine, should there be one previously existing, will be revoked in the case where the same User ID has leased a license from two other workstations in the previous 24 hour / 7 day period. The third machine will, however, be able to lease a license after 24 hours / 7 days have passed.

The Lease info is stored locally in the profile, so if they no longer have access to it they will lose the lease. Look for root cause details in the LeasedLicense section of C:\Users\\AppData\Roaming\QlikTech\QlikView\Settings.ini. The LeasedLicenseCheck value shows more details on why the license lease has failed.

You can also open via QlikView Desktop Client > Help> Document Support Information and search for the parameters above, as below: 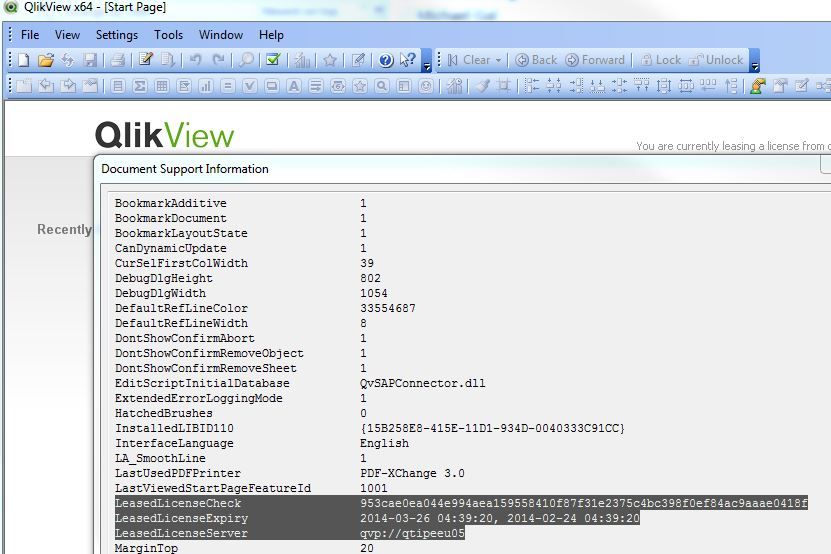 License Lease is not allowed if the QlikView Server license has a document restriction, meaning license only allows for a certain number of documents.

This is specified as a NUMBER_OF_DOCUMENTS tag in the license LEF file.

Deleting of the folder ConnectionsMRU und LeasedLicenseMRU in the Registry

(More common on a Windows Server) The user is logged into a temporary profile.

This will allow the license to lease initially, but the lease will be removed once the temporary profile is cleared out. You can check for this after the user logs in by going to C:\Users and looking for the login name.  If it's not there, and there is a Temp folder, check there. One fix would be to disable temp profiles.

Port 4747 is not open on the computer attempting to lease the license from the QlikView Server and communication using QVP protocol isn't possible.

This typically the case when error "Connected to server OK, Negotiations Timed Out Switching to HTTP tunneling" is returned.

one of our customers changed Server and Qlikview stop to work..

They are not able to find the original purchase...

If we give your the customer name, it could be possible to help them to recover the licence information?

I would recommend reaching out to our Customer Support as they should be able to help you with that. Head over to https://support.qlik.com/ and log in there to create a ticket.

Version history
Revision #:
7 of 7
Last update:
a week ago
Updated by: