Announcements
Read about the latest Qlik Community enhancements on the Community News blog!

Today I am going to blog about Error Variables and how they can be used in an app.  Error variables are available in Qlik Sense and QlikView to:

The four error variables I will review in this blog are:

Of the 4 error variables, ErrorMode is the only variable that is set by the user.  This variable determines what should happen if an error occurs during script execution.  This variable is set in the script like this:

Let’s see how the error messages are presented if I run the simple script below to load a group of Excel files that start with “Book.”  Note, that all the files loaded do not include the “Monthly Sales” field.

If I precede this script with Set ErrorMode = 0, this is what I see when the script is complete. 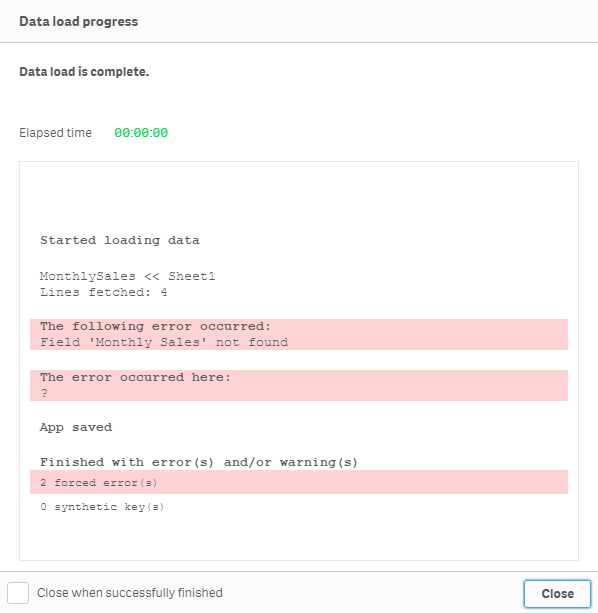 Notice that the script finished executing even though there was an error.  Now let’s see what happens if we keep the default (ErrorMode = 1) or set ErrorMode = 2. 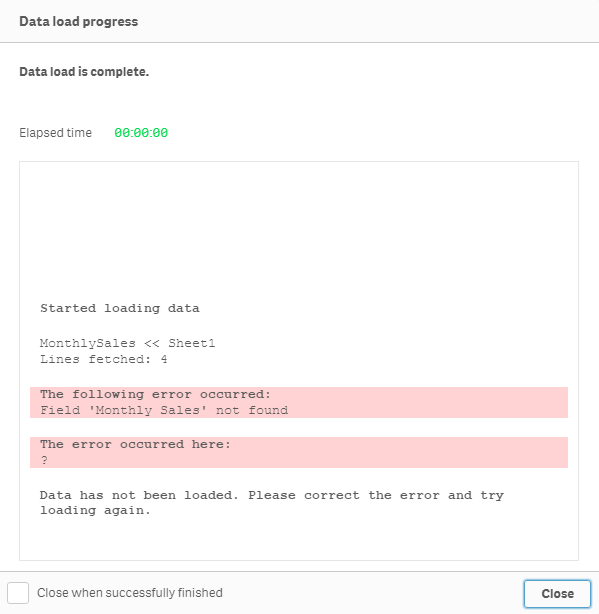 Here the script execution stopped at the error and did not complete providing the option to Close, correct the script and reload again.

Error variables are useful and easy to use.  I find ErrorMode = 0 the one I use the most when I know there is a chance that the script may throw an error that is ok to ignore.  It is also useful if you need to control the path of the script’s execution based on an error.  You can learn more about error variables in Qlik Sense Help.

Speaking from experience, be very careful when it comes to using ErrorMode = 0 without error handling. Sometimes one issue during a reload can cause a chain reaction that will either turn the entire model into gibberish, or worse, cause the reload to hit 100% resources and clog the server. Make sure you are placing this in parts of the script where you can actually safely continue without the specific loads involved.

In particular, you should be careful / avoid using ErrorMode = 0 without error handling in the following situations:

In all of these situations, I would probably avoid using ErrorMode = 0 unless you've built proper error handling into your script using the other load variables. Being out of date by a day is likely to be better than displaying incorrect results or clogging your server.