Variables can be used in many ways in QlikView. They can have static values or they can be calculated. But when are they calculated?  At script run-time or when the user clicks? And how should they be called? With or without dollar expansion?

One basic way to assign a value to a variable is to use a Let statement in the script:

This will calculate the expression and assign it to the variable when the script is run. This is exactly what you want if you want to use a variable as a numeric parameter in your expressions.

But if you want the expression to be evaluated at a later stage, e.g. every time the user clicks, what should you do then? One way is to store the expression as a string in the variable, using either the Set or the Let statement or by defining it in the Document Properties -> Variables:

In neither case, the expression will be calculated. The variable will contain the string ‘Sum(Sales)’, which subsequently can be used in an expression using a dollar expansion: $(vSales).

With a dollar expansion, QlikView will substitute the ‘$(vSales)’ with ‘Sum(Sales)’ before the expression is evaluated. Some of you will recognize this as an old style assembler macro expansion. The subsequent calculation will be made based on the evaluation of the resulting expression. Note the two steps: (1) Variable expansion; and (2) Expression evaluation. 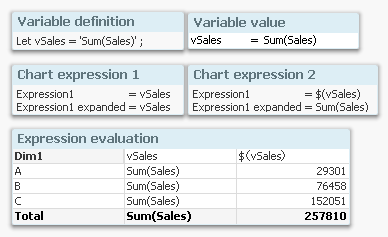 But this is just the beginning…

It is also possible to calculate the variable value, i.e. determine how it should be expanded, by using an initial equals sign in the variable definition.

The table below summarizes the three methods.

With the above, you can do almost magical things. You can for instance make conditional calculations that depend on e.g. selections, client platform or user.

The calculation in a chart will now toggle between Sum(Quantity) and Sum(Sales) depending on your selection. 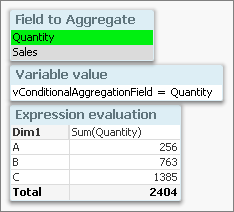 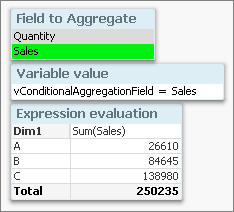 The use of variables is an extremely powerful tool that you can use to create flexible applications. Use it – but with caution. Too much magic behind the curtains can be confusing.