The simple attached applications (and sample code) will allow you to setup your Qlik reload processing (in QlikView Server, Publisher or Qlik Sense) to kick off directly on completion of a process on a source system (e.g. an ETL process on a DW).

Tip 1 - Add in a pause to the loop so that your application doesn't spam the DB with requests.

A sleep command is added which pauses the reload following an unsuccessful pass. This could be set to every 10 or 60 secs to reduce a constant barrage of requests being sent to the DB. When the condition is met the script will exit the loop before the sleep is activated.

If you have a more complex environment where reload windows are constrained you could setup multiple triggers based on different event outputs from the DW. For example, where the DW completes a sales transactions fact but has many other dependent tables still to process you could have an event written to allow one stream of your reload to commence. The other streams could rely on different event triggers when all table reloads are complete.

I have seen many different ways of setting up processes such as this, most of which IMHO are over-complicating something quite simple. One of the pleasures of working with Qlik products is the relative lack of complexity and the ease of understanding each implementation you come across. This is something we should promote rather than the tendency in IT to introduce/play with another bit of code or tool which makes debugging issues more technical. It also results in hidden steps in the process when someone new is introduced to the implementation, and documentation rarely gets the message across. When I say 'hidden' I would suggest that an initial trigger application in the reload schedule is very clear to someone new to the specific Qlik implementation, actions in source DBs or other programs are not immediately clear and require some digging etc to find and understand.

The example code based on a .txt file in Qlik Sense - change the LIB reference to a defined folder location for QlikView.

// where condition is met, exit and complete.

// where condition is not met then restart loop.

The attached files can be used to test this process.

It is important to match the formats of the dates in both files. Check your global variables in the main tab to understand the settings you are assigning to the vToday variable as this will need to match the data being read from the source to complete the process. The screenshot below shows where to check in Qlik Sense, the same applies in QlikView. 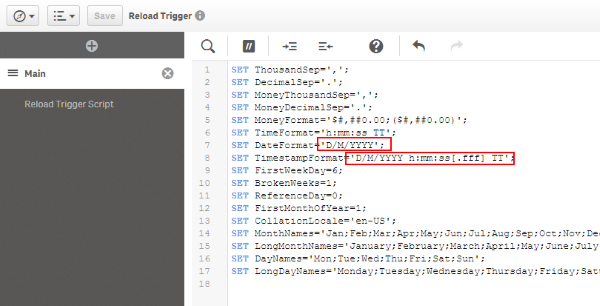 Our take on this was to add a bit more complexity. This lets us finish the script if it takes too long, and we read the timestamp instead of date. The output from the database was generated in PowerShell to ensure correct timestamp format. Despite this we encountered some charset issues, ensure that you are using the right one (unicode / UTF-8 etc)

trace sets the Data Warehouse date to right away, as it is null '$(vDWDate)';

trace sets the variable for what time it is now, which is '$(vNow)';

trace allows us to finish earlier if the script is not met, which is '$(vFinishAnyway)';

//where we find the stuff

// where condition is met, exit and complete.

// exits earlier if the loop has been running for too long

// where condition is not met then restart loop.

If you have several more steps within the environment you can just output a similar take from QlikView/Qlik Sense:

trace sets the variable for what time it is now, which is '$(vNow)';

//where we find the stuff

I have implemented your solution and it is working fine, but my use case is , as number of times extraction process happens on server my reload task will get triggered. I have created a task on ETL layer as whenever extraction will happen it will put a time stamp in a csv file  which is 15 minutes more value than current time. So I have put a time stamp value in format : 20/06/2017 09:45:07 pm

//last time stamp value is in vDWDate is less than vToday

//where condition is met, exit and complete.

//where condition is not met then restart loop.

Please tell me what exactly I am missing.

Consider this on priority basis.

Without your example to debug my first thought would be to ensure your timestamp formats are being recognised correctly. transform them into numbers with decimals for the time of course, ensure they are both correctly transformed and and then do the comparison. I am on leave for the next 2 weeks (the first week I will not have access to the internet so may find it difficult to debug you example for a week or so) but if you want to attach your example then please feel free to do so and I'll look at it then.

Here no advanced editor option is coming, Can you share your email id so I can mail you my application please?

hi rohitk1609‌ did you solved the issue. my case also similar for a day number of extraction process will happen in DB. i need to reload number of times.

You would need to define some logic for this based on timings (rather than date time). I will suggest one quick option for you which might work without you getting into APIs which is the more advanced approach.

There are many other variants that could be created to meet the need. However, the cleanest option in this case would be to have an API call (Qlik Sense) or EDX call (QlikView) to trigger the reload from the database process itself but this takes a bit more knowledge to set up.

Thanks for the reply ryy

Let me clarify the approach I was thinking of when I responded as I'm not sure you fully understood it:

If you need to do this differently there are plenty of ways but that was not the intention of this post. This is an example to be extended as per your needs.

With regards to scheduling your reload multiple times you will need to create a trigger for each time of the day you wish to refresh that is synchronised with your DW refreshes. These triggers can be set to repeat daily (and you can have as many as you like against a single application as logically allows, i.e they cannot overlap).