Announcements
Join “Do More With Qlik” with Mike Tarallo to get a first-hand look at the New Authoring Experience, June 29th: REGISTER HERE
Options
Turn on suggestions
Auto-suggest helps you quickly narrow down your search results by suggesting possible matches as you type.
Showing results for
Search instead for
Did you mean:

After a recent upgrade to April 2019 SR3 we received reports of users receiving the "Export failed please check server log for more details (It's most likely that export process took too much server resources)" message. We successfully tested exports, so this was surprise. We were looking at KB46660 to increase the export limits but found that was not the issue. The issue was corrected by recreating the specific charts in the new version of Qlik. Hope this helps someone. 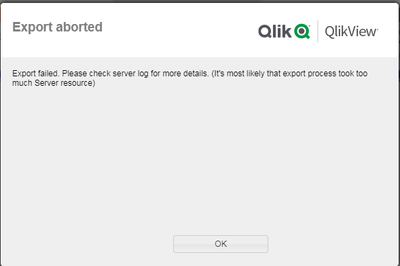 FYI - this appears to be my issue (disabled expressions causing failed Excel export):

FYI - this appears to be my issue (disabled expressions causing failed Excel export):