4. Do not close document and reload again (See 2 screnshot in attachment) = all good! 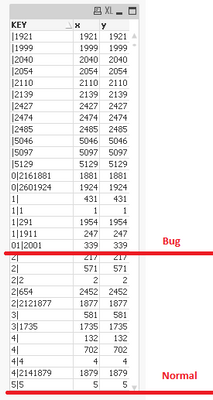 I am sorry to report that a decision has been made to not do a fix in the 11.20 track, here is the Article link explaining things, but I am sorry I was not able to get you a patch so you could get higher than SR16.

I am going to mark this as the solution of this thread after posting it.

To help users find verified answers, please do not forget to use the "Accept as Solution" button on any post(s) that helped you resolve your problem or question.
I now work a compressed schedule, Tuesday, Wednesday and Thursday, so those will be the days I will reply to any follow-up posts.

UPD: If you insert such code at the beginning of the script, all of the following code will be considered correct. I.e. failure likely goes to 1 of the computation, fabs,sign and other.

I confirm. We also reproduce the problem.

11.2 is (nearly) out of support. Therefore it would be more interesting - does it exists within the QV 12 releases, too?

But us interested in 11.20 on latest SR because transition on QV 12 for us will not soon.

The transition to version 12 is more difficult than updating SR within one version.

Please open for it a support-request. Even if they couldn't comprehend the issue or deciding not to develop a regular or custom bug-fix they might be able to give hints to bypass it.

Personally I would assume that such an issue should occur more randomly and not by the first load and after a second load everything is working again. Therefore it could be useful to wrap it in a loop to repeat it n times and checking each time the results with noofrows(), fieldvaluecount() and so on. Further would be interesting what would be stored in a qvd - right/wrong data - and how did it change if you load your final data from a qvd (maybe this is already a practically bypass).

2. If before this script insert here is this for example, then bug, too, is missing.

(For a workaround, we can use include (..) with this script)

3. The error occurs only when mathematical functions such as fabs, sign, and others are used in the script.

Therefore, the script above uses fabs to fix the problem in the script below.

The loop also solves the problem, because only at the first collision with mathematical functions the data breaks the integrity

5. Bug repeated on several PCs, It's more like mysticism. More I do not understand how after the bug it is not fixed for the next 3 SR