Right, battled hard over that last few days to figure this one out but I had no luck.  Hopefully someone here will be able to help:

the following set analysis is used to create the respective chart: 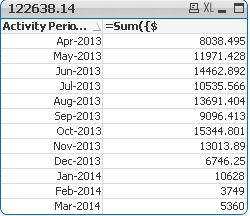 As you can see the vStartMonthYear and vEndMonthYear are variables that let me garb the Year to date range.

The figures displayed in the chart are not what the users are after, instead of having a sum for the month, they want a sum for the 12 months leading to the month.

So, for example the value for:

As well as the sum, they also want the average, which should be easy as it will always divide by 12.

I believe this is how a rolling 12 month average works, so i'm hoping someone has achieved this in QlikView.

I would like the table to be displayed as above with the same dimension.

is this possible with set analysis, if so, how??

Not applicable
Author
In response to MK_QSL

Hi manishkachhia I have already seen this and used it to achieve an accumulation of the value over 12 months, so:

Try to use MonthYear instead of Month used in that post.

I assume you want to see the monthly (in column 1) as well as the cumulative, and the average:

Logic will get you from a to b. Imagination will take you everywhere. - A Einstein
166 Views
0 Likes
Reply

Not applicable
Author
In response to jonathandienst

Hi Jonathan, I dont believe this will work as how would I maintain my original set of dimensions and then for each dimension (month) go back 12 months to do the sum?