Lets say I have two tables, "Births" and "Population"

The Births table contains details of births, together with the age of the mother, grouped into 5 year segments i.e. 15-19,20-24,25-29 in the field FIVE_YEAR_AGE_BAND.  There is also the gender of the baby - Male,Female in the field BABY_GENDER

This links across to another table on FIVE_YEAR_AGE_BAND and MOTHER_GENDER in order to get the population list size for that age band/gender.

Everything is good, but if a user wishes to select 3 age bands, like the 15-19,20-24 and 25-29 as above, and a BABY_GENDER of Male, the list size is only the sum of list sizes which have a birth against them - the population for the excluded isn't counted.

In the example I have selected everything as above and the list size 'technically' 113 as per the data model, but I am after 141, including the list size of 28 for the age range 20-24 which is excluded as there was no birth in that group with a BABY_GENDER of Male.  Is there a way to include it?  This is a relatively simple example, in reality, there are lots of other filters which could narrow the activity, but crucially, if the user has selected any FIVE_YEAR_AGE_BAND, I want the sum of the selected populations (in the chart) - but it is made a bit more complex because in my real development there are other dimensions which I still want honouring - by that I can't just use {1<FIVE_YEAR_AGE_BAND=<enter variable that concatenate all selected age ranges>} because the 1 would include a raft of other age sizes for other doctors surgeries.

I've messed with +P()+E() and other crazy set analysis but can't seem to crack it.

May be exclude selection is BABY_GENDER here

Thanks for your knowledgeable response.  Indeed, that works in the situation I gave, but I've given it more thought and my example doesn't cover the issue I'm finding

I've re-done it so that instead of births, we have A&E Attendances at hospital.  The two tables now link on GENDER and FIVE_YEAR_AGE_BAND.

In my chart, I want to use AEReason and GENDER to get a count of attendances divided by the age range(s) selected.  I can't get the 141 in both 'Female' rows using the method you suggested.  Any ideas? 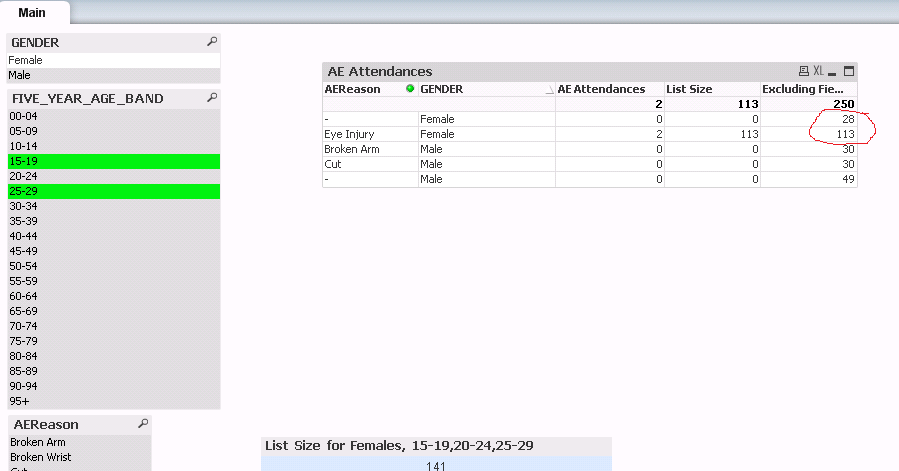 I hope that makes sense